If even the title of my last post – 10 long books to read on lockdown – was enough to make you run away screaming, then come back! This one is for you. I present: 10 short books to read on lockdown. With all of my selections under 100 pages and even a couple under 50, this list could easily be devoured over a weekend, or savoured in the odd spare moment here and there. 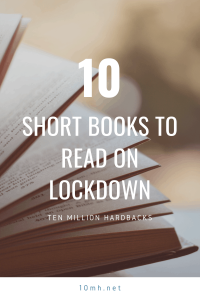 My 10 short books to read on lockdown:

(Disclosure: If you buy books linked to our site, we may earn a commission from Bookshop.org, whose fees support independent bookshops.)

Mr Sun is a proficient businessman, who likes to count his time in seconds and communicates via an app that deletes everything shortly after he receives it. He is checking into a hotel in LA because he has to kill someone in the morning. Nothing goes to plan after he arrives at his latest job and what follows might be ‘enjoyed’ by fans of CSI and gory detective stories – although it is definitely not for the faint-hearted – as Mr Sun goes through the process of ‘dead pig collecting.’

After a brief false start, Ivan Hron seems to have it all: a beautiful wife, a senior position, a lovely home. He and his wife Magda are childless, but keep their sorrows about that part of their life to themselves.

…tenderest compassion and deep pain filled his heart when, sometimes, late at night after having finished some important piece of work, he entered their bedroom on tiptoe. Before opening the door he would listen whether he could hear her sobbing. Then he would wait until the spasms subsided, creep to his bed like a thief, relieved when he heard her breathing quietly, and in the morning when he waked her with a kiss, express in it his whole love and tenderness.

A chance discovery leads Ivan to realise that he has perhaps not known Magda as well as he could have and that she has been concealing something from him that will test his devotion to her. His dilemma of knowing her secret and yet having to not know is beautifully captured and you wonder whether many men of the time and place (early 20th century Prague) would have been capable of the empathy he shows. Part of the Very Short Classics series of ebooks and deserving of that name, translated by Marie Busch and Otto Pick.

Hans Fallada, Why Do You Wear a Cheap Watch?

Three short stories from the writer of Alone in Berlin/ Every Man Dies Alone and Little Man, What Now? set in Germany in the early Thirties, translated by Michael Hofmann. The title story shows the perils of watch-owning, War Monument or Urinal? the perils of getting involved in small-town politics, which are about to get much nastier. My favourite is Fifty Marks and a Merry Christmas, or love in the time of rampant inflation. Hans Fallada writes with a wry gaze for the human condition in all of these stories, part of the Penguin Modern series.

With a translation by Marie Ottilie Heyl, this is another Very Short Classic, ably demonstrating that thwarted love and the trapeze should not mix.

John Maguire reviewed this wonderfully offbeat tale of a nose that goes astray (from the Penguin Little Black Classics series and translated by Ronald Wilks), and then gave me a copy for myself. It is as good as he says!

Another Penguin Little Black Classic, this contains six stories, including The Nightingale, The Princess and The Pea and The Red Shoes, which remind us that while fairy stories may more commonly appear in our imaginations as Disneyfied tales, the originals are quite a bit darker. Translated by Tiina Nunnally.

Ever have one of those nights out you have been anticipating all week at work, mentally planning your outfit, where you will go, the interesting people you will encounter and the sparkling conversations you will engage in? How the humdrum, ordinary world will melt away and you will step outside of your ordinary shell and shine, shine, shine. Yvonne too. But this being Iris Murdoch, it probably won’t end how she hopes…

Yoshida Kenkō, A Cup of Sake Beneath the Cherry Trees

Musings on death (of course), love, home, friendship, gardening, books, cherry blossoms (of course), festivals, grief, fame, the search for knowledge and drinking, in another Penguin Little Black Classic, translated by Meredith McKinney. They read almost like diary entries or a 13th-century version of a blog.

…I let my brush run on like this for my own foolish solace; these pages deserve to be torn up and discarded, after all, and are not something others will ever see.

And despite being the oldest work on my list of 10 short books to read on lockdown, there is still much here that is relevant to today:

Rather than seizing thieves and punishing their crimes, it would be better to make the world a place where people did not go hungry or cold. A man without stable means is a man whose heart is unstable. People steal from extremity. There will be no end to crime while the world is not governed well, and men suffer from cold and starvation. It is cruel to make people suffer and drive them to break the law, then treat the poor creatures as criminals.

Ryunsuke Akutagawa, The Life of a Stupid Man

Three short stories from a master short-storyteller, translated by Jay Rubin. The first, In a Bamboo Grove, sets out the statements given to the magistrate investigating after a man’s body has been found with a single stab wound to the heart. Each witness reveals more and more of what happened, until the murderer confesses and even the man’s ghost gets to have some input via a medium. Death Register is the recollection of lost family members, with fragments from each of their lives being recalled by the narrator as he prepares to visit their grave. The title story contains moments from a life, sometimes fragmented, as reflections that pass and are gone again.

He wanted to live life so intensely that he could die at any moment without regrets. But still, out of deference to his adoptive parents and his aunt, he kept himself in check. This created both light and dark sides to his life. Seeing a comic puppet in a Western tailor’s shop made him wonder how close he was to such a figure. His self beyond consciousness, however – his ‘second self’ – had long since put such feelings into a story.

I am sure you know the character, but if you haven’t already read the book itself, it will delight young or old. A pilot crash-landed in the desert meets a young prince visiting from his very small planet and tales are told while the pilot tries to fix his plane and the prince wonders about how to get home.

All grown-ups were once children… but only few of them remember it.

I realise that my list of 10 short books to read on lockdown is very male-dominated, which is something I often complain about with other lists and especially award shortlists but, in the spirit of TBR20, these were all books I already owned. Four are from the Penguin Little Black Classics Series, which features a few more titles that I now have my eye on, including one by Katherine Mansfield. The Penguin Modern series – from which I took Hans Fallada’s Why Do You Wear a Cheap Watch? – also includes works by Audre Lord, Jean Rhys, Kathy Acker, Françoise Sagan and many more. They all cost around 50p to £1 each so finding your own 10 short books to read on lockdown should be easy!

Happy hunting and let me know your favourite short reads in the comments below.