City living has its risks, seven seagulls fly by pooping on my suits in the last year. Concrete paving slabs splashing up rainwater underneath. But one of the advantages has to be the cast of characters you can encounter simply walking down the streets. Who needs to pay for a TV licence? Real life is far more entertaining. This ensemble of characters is captured in the work of Liverpool photographer, Stephen Shakeshaft.

The photography of Stephen Shakeshaft first flashed onto my retinas in Liverpool’s now closed National Conservation Centre. I used to visit this exhibition space and sit with a double espresso underneath the Eros statue in the café. I was stunned by the image-maker’s work and have been a fervent admirer of his art since. He does something which I think is unique in his compositions. Anyone can simply take a picture, point and click and now with the invasion of apps, airbrush, tint to vintage, fade away and radiate.

This artist captures the resilience of Liverpudlians. The Scouse stoic sense of surety, with a cut to the bone sarcastic humour. With just one look of the eye, his sitters tell their story. Lizzie, for example, selling fruit from her market stall, whatever the weather. She glares at the camera with a hard affection and knowingness.

It was a treat for the eye to view Stephen Shakeshaft’s collection of images of the Liverpudlian icon Ken Dodd recently at the Museum of Liverpool. I absolutely love Ken Dodd, I find he is like a Scouse Surrealist, a genius of madcap humour. Try and explain the Diddy Men to anyone, bizarre with a capital B,

Did someone spike that man’s tea?

And what about his tickling stick? Like Magritte’s pipe, it has become a signature. As the joker Dodd puts it,

A lot of people say it’s a sex symbol, but I think that’s a fallacy.

The candid snaps displayed the man on stage and backstage drinking a pint, a cup of tea, lounging on a couch. With close-up images to reveal the attention to detail that is applied to his act. For example, a worn battered make-up kit and arsenal of tricks, to help him on his missive to give the world, ‘a little drop of tickle tonic’. 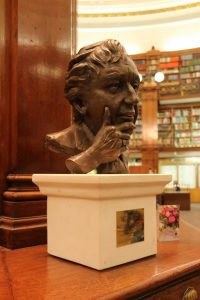 If Ken Dodd was around in William Shakespeare’s day, he would have been a fool in one of his plays, all, ‘Nuncle’ and mirth-laced, with a subtle dosage of truth. Kenneth Branagh recognised this quality and cast him in his screen version of HAMLET. This celebration of the official lunatic from Knotty Ash, Mr. Ken Dodd, did leave me feeling

full of plumtiousness and gratitude.

Liverpool Museum and Riverfront photo by Conor Samuel on Unsplash