What an entrance! As you approach The Bluecoat to visit its latest art exhibition – In the Peaceful Dome – the limn of the building invades the eye with its beauty. The Queen Anne architecture is so splendid that even the enemy bombs that landed during the Second World War couldn’t have had the heart to annihilate it, just like the majestic St Luke’s Church: blasting the insides but leaving the external structure intact. The Bluecoat is the oldest building in Liverpool and – like Jane Fonda – the older she gets the better she appears to look. Absolute elegance in brick form.

In one corner of the courtyard etched in the stone is graffiti from the children who populated the yard when it was a school for the poor. The uniform was a simple blue coat and it was founded by master Mariner Bryan Blundell. As in evidence in most of Liverpool’s civic buildings, our friend the Liver Bird is etched onto the construction, carved above the front door and also atop the iron gates. A twig of seaweed perched between its beak to signify the creature’s maritime links. This is not because of the rise of hipster super foods. The Bird was not the first Scouse vegetarian. Without seaweed the Liver Bird would not exist (if it really existed?) and without the sea and trade from maritime operations, Liverpool would not exist.

During my teenage years, the Bluecoat hosted record and book fairs. It was the place that started my addiction to independent book stores, a vice I still indulge in to this day. Thankfully, the excellent Kernaghan’s is here to ensure that I carry on doing as the wise and warm proprietor, Brian encourages his readers to do, to read, think and grow. The Bluecoat, News from Nowhere, the Walker Art Gallery, the Tate and the Central Library all provided me with a sanctuary. A place I could escape from the rapscallion (scally) boys on my council estate, constantly giving me grief because I was different. They knew it; they could smell it. Here I could deaden the sly remarks and find an escape into the exciting waters of bohemianism. It was a good few years before I fell down the Christopher Isherwood-like rabbit warren of fabulosity that was The Masquerade. A place that allowed me to develop a resilience and confidence, to hone an armoury of wit and acidity.

The Bluecoat has been a magnet for creatives through the years. The original Quiggins grew alongside it, a place that like a wildflower garden was always blooming into uncontrollable beauty. Yoko Ono, George Melly and Allen Ginsberg all hung out here at one time or another. Groups and movements have gravitated towards it, notably the Sandon Studios society in 1907 and, more recently, the Juniper Press, Sense of Sound and DaDa to name but a few. To mark the establishment’s 300-year anniversary, the current exhibition celebrates the historic and contemporary art that has visited through the years. 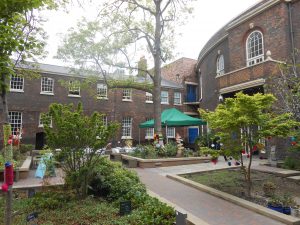 It is comforting that the collection is entitled In the Peaceful Dome, a label that references something I personally felt and still feel in The Bluecoat, a sense of solace. The formidable William Roscoe’s words illustrate how it is a place of refuge, a space to retreat, recharge and reflect,

YON CALM RETREAT, WHERE SCREENED FROM EVERY ILL,
THE HELPLESS ORPHAN’S THROBBING HEART LIES STILL;
AND FINDS DELIGHTED, IN THE PEACEFUL DOME,
A BETTER PARENT, AND A HAPPIER HOME.

What is great about the space is it reminds me a bit of an artist’s studio because it is constantly evolving, in a state of perpetual change.

One of the works that really resonated for me was the reproduction of the Bluecoat school co-founder Bryan Blundell’s paintings. His Mulberry (1696) on display was the first ship to leave the Old Dock in 1715. Thomas Steers, the master canal engineer behind the construction of the Old Dock, was also responsible – with mason, Edward Litherland – for building the Bluecoat. But the main event has to be the return of Jacob Epstein’s statue Genesis. In 1931, when it was first displayed, it had to be seen by ticket only, at sixpence and in isolation. 50,000 people took a peek at the controversial and much-debated work. It even ended up as a sort of curiosity on display in Madame Tussauds in Blackpool.

Now it sits proudly, in the open plan next to the display windows that lead to the busy thoroughfare of College Lane. It reveals how far we have progressed in society. We can access all types of perspectives of the human torso at the click of a button and nudity is commonplace. I particularly like a black and white photograph of the sculpture being moved into place in the Thirties. One suited flat-capped chap with the aura of a dapper has a shifty smile as he sees the piece being shuffled into position. A look that conveys delight with the mischievous glimmer in his eye. Personally, as I have looked at this piece several times and have taken many of my walking tour guests to see it, I cannot help but notice that the work reminds me of the actress, Angelina Jolie. One of the tourists said it resembles Roger the Alien from Family Guy! However you interpret the work, it cannot be forgotten how advanced and ahead of his time the artist was in crafting this celebration of the human form. The work is strikingly contemporary.

The exhibition, In the Peaceful Dome, ends on Sunday 8 April. Let’s hope the Bluecoat continues to offer our city challenging and innovative work for a further 300 years. Entrance is free but do what I do to show your support: go there for drinks, meet friends, have lunch in the elegant Bistro. I always ensure I partake in having a bowl of what I think is the best offering of Scouse, (the Liverpudlian city dish), in town. It is fit. Or have blind Scouse, with no meat, if you are a vegetarian… like the Liver Bird.