Tell Them of Battles, Kings and Elephants: Mathias Enard

If you like historical fiction that leans more to the historical than the fiction, how would you feel about an almost wholly invented story, one with enough reality sprinkled through it to delight and bamboozle? In Tell Them of Battles, Kings and Elephants – available from Fitzcarraldo Editions – Mathias Énard conjures up a journey taken by Michelangelo to Constantinople, where he is tasked with designing and building a bridge over the Golden Horn, at the request of the Sultan Bajazet II, conveyed by his Grand Vizier Ali Pasha. At a time when the sculptor should be riding high on the success of the recently unveiled David, he appears to have fallen out of favour with his patron Pope Julius II, perhaps due to rivals like Raphael and the architect Bramante, so the chance to chase fame and fortune in another great city, build an eternal landmark and beat Leonardo da Vinci – who has tried and failed at the same job – is too good to pass up.

Of course, the reader will know all or many of these names, but Tell Them of Battles, Kings and Elephants is pure make-believe, managing to cover its tracks with enough seductive details to make it feel more true than not. You will delight in forgetting that none of this – apparently! – ever happened, so powerfully and playfully does Mathias Énard bend and twist the real and the unreal. That he does so while considering the nature of creative work makes this a joyful read: the inspiration, the notebook, the studio. The rages that end in smashing things and the days spent drawing until the chalks and pencils are worn down.

Michelangelo knows that ideas come to you through drawing; he keeps outlining shapes, arches, pilings.
The space between the ramparts and the shore is too small.
He thinks of the old medieval bridge of Florence, that frog surmounted by crenellations and peopled with butcher shops stinking of corpses, narrow, closed in on itself, it lets you see neither the majesty of the river, nor the grandeur of the city. He remembers the blood flowing in the Arno in rivulets when the animals are slaughtered; he has always had a horror of that bridge.
The amplitude of the task frightens him.
Leonardo’s drawing obsesses him. It is vertiginous, but flawed. Empty. Lifeless. Lacking ideals. Decidedly Leonardo takes himself for Archimedes and forgets beauty. Beauty comes from abandoning the refuge of the old forms for the uncertainty of the present. Michelangelo is not an engineer. He is a sculptor. They sent for him so that a form could be born from matter, be drawn, be revealed.
For now, the matter of the city is so obscure to him that he doesn’t know what tool to use to attack it.

For all that it could drift into fantasy, Tell Them of Battles, Kings and Elephants is also grounded in questions of what a bridge is for and what must it do, or weighing the competing desires of getting the work done and feeling inspired or distracted by the world, as Michelangelo and his new friend, the poet Mesihi of Prishtina, wrestle with the pull between the holy and the profane in wildly different ways. This is a relatively short book that manages to leave the reader with the feeling that it could easily have been twice as long and yet is also the perfect length. The story weaves between letters and lists, based on real ones kept by the sculptor, and a story told in a language he doesn’t speak, by an androgynous singer who has escaped from Moorish Grenada. In Constantinople, Michelangelo encounters a world that is familiar and strange, with more enlightened views on sexuality and gender than are to be found at home, and although he will not acquire the habit of bathing, he will discover that the intrigues are more alike than not to those that surround Pope Julius.

Tell Them of Battles, Kings and Elephants was showered with praise when it first came out and deservedly so. Mathias Énard, assisted by translator Charlotte Mandell – who has worked on others of Énard’s books – have conjured 16th century Constantinople so wonderfully and crafted the tale down to the smallest detail, querying whether this or that sight could have inspired Michelangelo in a later work, that it will break your heart when you remember that of course, that could not be. Likewise, just because the back of your brain knows with certainty that Michelangelo could not have come to harm in his youth in Constantinople, it does not lessen the tension of the plotting that swirls about the Vizier and the Sultan. It is for the Singer to remind us…

Your bridge will remain; maybe it will take on, as time passes, a very different meaning to the one it has today, just as in my vanished country they’ll see something quite different from what it actually was, our successors will hang their stories on it, their words, their desires. Nothing belongs to us. They will find beauty in terrible battles, courage in men’s cowardliness, everything will enter into legend. 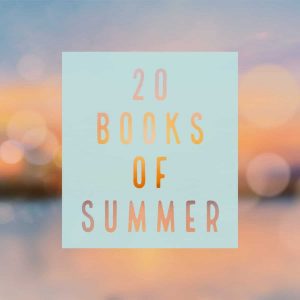 Tell Them of Battles, Kings and Elephants is my latest read for 20 Books of Summer ’20. How is your summer of reading going? Let me know in the comments section below.

Detail from The Prospect of Constantinople, Melchior Lorck / Public domain

What to read for Women in Translation Month 2020