In his introduction to The Penguin Book of Japanese Short Stories, Murakami Haruki describes the collection as giving ‘the same kind of mysterious and unpredictably rewarding experience’ as buying a fukubukuro or ‘lucky grab bag’, traditionally sold at New Year in Japan and usually containing goods of a value in excess of the bag’s price, but which the buyer cannot see before buying. I picked up my first fukubukuro this year – a stationery bag from Muji – and was not disappointed in the slightest (MORE NOTEBOOKS AND PENS!) and neither will you be with the selection of stories in this book.

The stories are grouped by loose themes, such as Loyal Warriors, Men and Women or Dread, or a chronological list is also provided. The quote on the front page from a review describing it as an ‘idiosyncratic mix-tape’ also rings true. Editor Jay Rubin says in his note that he wanted to choose stories that will stay with the reader and that has been my experience. Usually when you read a collection of short stories, you have your favourites, strong dislikes and perhaps a few in the middle. And while I can pick out a few must-recommends off the top of my head, on starting to scribble down a list it kept getting longer and longer, until encompassing pretty much every tale. There have definitely been more than 20 new books added to my to be read list.

I loved Kawabata Yasunari’s The Silver Fifty-Sen Pieces for its gentle pre-war family scenes and the familiarity of a mother-daughter debate in the department store before events intrude. Ota Yoko’s Hiroshima, City of Doom struck me for the similar normality of the scenes between the narrator, her sister and mother, as even in the middle of the devastation, they talk with regret about the breakfast they didn’t get to finish before the bomb went off.

Saeki Kazumi’s Weather-Watching Hill reminded me of Tohoku and how the landscape could play tricks on the eye.

I had never really given much thought to those trees before, but as I stood there that morning, they came to me almost as a distant memory: a cluster of lush green pines clinging to the coastline, with the ocean shimmering over them. The beach was now as bare as a comb missing most of its teeth. With a pang, it occurred to me – there are some things you don’t notice until they’re gone.
The swollen sea, viewed through the remaining pines, appeared bigger and closer than before. Around the mouth of the river that ran between my town and the next were patches of boggy ground, reflecting the dull light of the sun.
Suddenly it hit me, that place… had been a village! In my mind, I could see the faces of friends and neighbours who had lived there.

Alongside famous names and classical themes, there are also stories appearing in English for the first time. And as well as the dramatic historical events and natural disasters that Japan has experienced, The Penguin Book of Japanese Short Stories also includes tales set in the everyday country in which I live, such as Kawakami Mieko’s Dreams of Love, Etc, or Ogawa Yoko’s The Tale of the House of Physics. I liked Murakami’s UFO in Kushino, where a disappearing wife sparks an enigmatic journey. Remaining Flowers by Nakagami Kenji was an enthralling tale of ‘the people of the alleyway’ who often aren’t the main characters in literature. Kunikida Doppo’s Unforgettable People sparked a train of thought, Filling Up With Sugar by Sawanishi Yuten is a dark take on the kind of nursing care that many more Japanese people are providing for elderly relatives, Genji Keita’s Mr English shows the early days of the salaryman lifestyle… Now I really am starting to list every story – and I could go on!

It would be possible to pick up this book, open a page at random and find something that you would enjoy or be intrigued by. The Further Reading section will be keeping me busy for the rest of the year. It shows the dedication and devotion of a group of editors and translators, including Jay Rubin, Geraldine Harcourt, Eve Zimmerman and many others who have done so much to bring Japanese authors to the English-reading world over the years, while the tales chosen for this volume also demonstrate that when English readers think of the ‘typical Japanese story’, there is really no such thing. 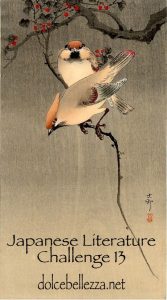 This review is part of the 13th Japanese Literature Challenge, hosted by Dolce Bellezza, which runs until March 2020. The website features many more great reviews, so be sure to take a look!

Are you planning to read any books originally published in Japanese this year? Let me know in the comments below.

Thanks for your review. I’m fond of short stories, and this looks like a wonderful collection. I’ve just finished reading Rashomon and Other Stories by Ryūnosuke Akutagawa for JLC13. Only six stories, so easy to handle, i.e. keeping my memory intact. 🙂

I think you would enjoy this one! It’s so full of gems that there’s bound to be something that stays in the memory.