The latest club read hosted by Kaggsy’s Bookish Ramblings and Stuck in a Book is for books published in 1976 and happily, I managed to find a secondhand copy of Alan Sillitoe’s The Widower’s Son to review. I had previously written about a few of my favourite Sillitoe books at the time when he died in 2012, but this was a new one for me. 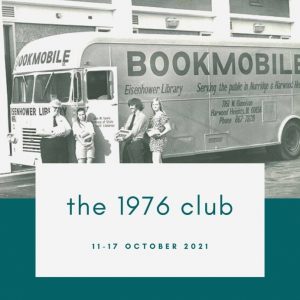 The Widower’s Son is the story of William and his dad Charlie, that begins with Charlie witnessing his best friend’s death in a pit accident and resolving to join the Army rather than go back to the mine. It is an act that sees his own father throw him out the house and sends him off to life as a professional soldier, first in far-off parts of the British Empire and then the trenches of the First World War. Coming home and marrying, his son William is only young when his wife dies of the flu and leaves him widowed. Charlie is a tough man on the outside and he has some regimented ideas of how William should be brought up, coaching him through the entrance exams for boarding school and his own start as a gunner. Once set on that path, William is the right age to be in the thick of the Second World War and the chapter on Dunkirk is extensively researched and one you probably won’t be able to put down until you reach the end – as I couldn’t!

By now promoted above the level his father achieved, coming back from the war and deciding to give marriage to the beautiful daughter of a Brigadier, Georgina, and civvy street a go, William is approaching 40 and faced with the question of who he is: the man his father and the Army built or his own person? Trying to lead a middle class life with his gorgeous wife, the nice house, big car and all the trappings does not satisfy for long. William seems to have done everything ‘right,’ everything his father and society expected of him, but he loses his way quite badly and there are some darker scenes before he comes to an understanding of who he is and what he wants out of life.

The Widower’s Son could be seen as a bit of a man’s book – with plenty of realistic war scenes and what a quote from the Times Literary Supplement coyly calls ‘sexual congress’ – but I found it a gripping read for its portrayal of William and Charlie’s relationship and how it evolves. I love how well Alan Sillitoe weaves in philosophy or pieces of working class history into the action as well. At times, some of the writing does inch close to Bad Sex in Fiction Award territory, but at least everyone involved is over age and consenting, which you cannot take for granted in 70s novels (yes, One Hundred Years of Solitude, I am looking at you.)

Sillitoe was often called a ‘working class writer,’ but like John le Carré , he writes about all classes and the class system so well, although that is maybe how it has to be: the working classes have to understand those above them to survive, while the upper classes never have to trouble themselves with working class life, as seen when William understands Georgina’s upbringing and way of thinking much more than she does his, for instance. She often calls him ‘my man,’ which I thought at first was her being wry or possessive, but realised it is one way to address a male servant, and she constantly assumes he is rougher than he is.

He was close to her, and loved her skin as if it were his own, and her breath as if it were coming from his own mouth. He couldn’t say fairer than that, and if he didn’t it was only because he assumed she must know how deep his love was without too many words… Because his love was at its height from the beginning he thought there was nothing more to receive or search for. When a love affair and marriage begins in a state of such passion there can only be a climb down to normality which neither of them knew how to live with.

William has a better relationship with Oxton, his ‘batman’ at Dunkirk. Though their ages, ranks and education should probably keep them apart, their shared experiences mean they rely on each other and both at separate times manage to pull the other out of a dark hole and bring about a second chance at life. William’s over thinking and searching contrasts with Oxton’s more simple outlook on life and enjoyment of it. And for all that they could be written off as tough guys, Oxton’s doting over his mother and eventual nursing of her at the end of her life is tender and loving.

I also thought The Widower’s Son was a perceptive portrait of trauma, while never explicitly referred to in that way, William and Charlie have both been sent off to the bloodiest fights of their respective generations, they ‘did their duty,’ grew into the role, perhaps, but they did not come back untouched. Once his wife is gone, Charlie is unsure of how to handle his son, perhaps because of his own difficult relationship with his father, perhaps because of his war experiences, so sending William off to school offers a way out for both of them. The question that is unspoken between them is did Charlie do the best he could or did he do William wrong? Is trying to direct your children understandable but fraught with danger, but is giving them no direction at all a cop out?

The book is of its time, so there is some domestic violence, although the perpetrator does feel wretched afterwards it is a ‘well, she goaded him’ framing, which jarred. Charlie’s sister Doris, the girls William picks up, Oxton’s mother and Georgina only exist through the eyes of the men. There is also one N-word, not used against anyone, but to describe someone covered in coal dust in the words of an older character. None of the younger characters say anything similar, so I wonder if it was perhaps there to show that older character being out of touch. That might be wishful thinking…

All in all, I am glad I was able to read another Alan Sillitoe book and join in with this week’s club read – check out the other reviews listed on Kaggsy’s site here. Have you read any Alan Sillitoe and will this one or any of the others from 1976 make it onto your ‘to be read’ list?