An interview with Jack Byrne, author of Under the Bridge 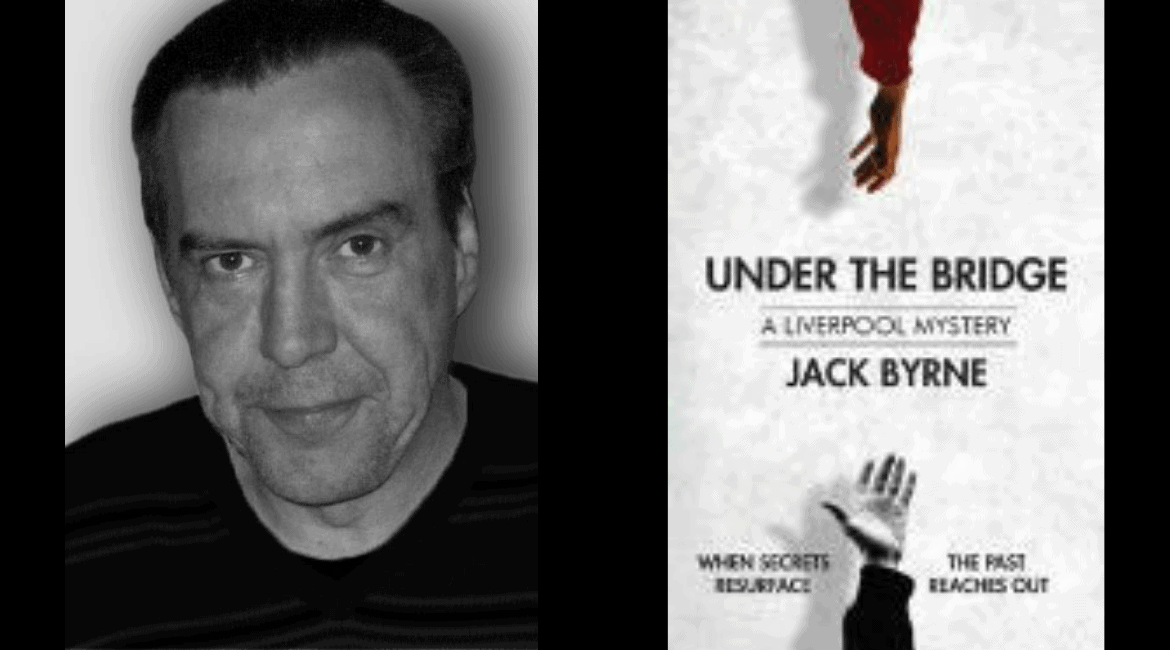 Liverpool’s past and present weaves itself around Jack Byrne’s debut novel Under the Bridge. The first part of his Liverpool Mysteries series, set in South Liverpool in Garston, Speke and Liverpool 8, Under the Bridge uncovers long-buried secrets as well as the often-forgotten parts of the city’s recent social history: the docks, the unions and the Irish immigrants.

Jack Byrne and John Maguire will be appearing as part of the Writing on the Wall WoWFest21 event on 18 May, to talk about Jack’s work, how important the locations in the book are to his writing, post-War Irish immigration to Liverpool and the obstacles and opportunities for working class writers. Under the Bridge is published by Northodox Press and Jack is represented by the Liverpool Literary Agency, which aims to bring more attention to northern writers from underrepresented backgrounds.

Before their WoWFEST appearance, the two got together to talk about Under the Bridge and Jack’s writing.

10mh: So tell us about your writing journey so far?

My debut novel Under The Bridge – ‘A love letter to Liverpool with a touch of Peaky Blinders’ was published in February 2021. But the journey started in my bedroom in Speke, Liverpool when I was 16 and began a biography of my father, an immigrant housepainter from Ireland. I never got further than half a page, but I knew I wanted to write about people like him. Unexceptional people who were part of an exceptional movement of people across the Irish Sea. They came not only to build hospitals and motorways after the war but also lives and families.
I wrote my first novel about 20 years ago but I didn’t have the confidence, money, or contacts to do much with it, and it is on the shelf next to me. Late last year I self-published a book of short stories The One Road on Amazon to try the system out.

There were two big differences with the novel this time, first someone read and liked it and encouraged me to finish it. Secondly I knew, even if it was rejected by publishers and agents I could self-publish. Technology has changed the book market, not so much for book shops but certainly online. These two simple things gave me impetus to finish what I was working on. In the process of preparing for self-publication Northodox Press picked up the book and the agent came along after the initial offer was made. So many decades later I got to finish that book.

The collapse of civilisation if the people are not strong enough to take power away from war makers and profiteers.
My writing being seen as superficial.
Getting things wrong, like dates and numbers, I’m always panicking that I have messed up in my research and a historical date or name are wrong.

10mh: If you could pick three pieces of music to accompany your latest project what would they be and why?

The first would be Brendan Behan singing The Auld Triangle. It has resonance for me, my dad spent some time in Mountjoy jail so the song is very evocative.
Lyin’ Eyes by the Eagles – when this song plays the protagonist should listen.
Paddy on the Road is an old song by Christy Moore about Irish workers on sites in the UK because it is so redolent of the times when my book is set, the 60s and 70s.

10mh: Where do you write? Do you have a special place, favourite time to write and what would be an ideal writing session?

After I drop the kids at school, that first couple of hours in the morning. The rest of the day is dealing with emails, admin, and the routines of family life. I write on the sofa, I don’t want a special place, or to be locked away. Surrounded by everyday life suits me best.

10mh: Who influences your work?

A full list would be huge, but most are from previous times Plunkett, Steinbeck, Zola, Dickens, Collins. Although I enjoy the skill of Grisham, Patterson, Follet and Ian Rankin among others.

10mh: What impresses you?

10mh: What are the ingredients for a BOSS story?

Great characters, at least one ‘What the hell was that’ moment, a story that drags you through and leaves you thinking long after the book is finished. Under the Bridge does all three.

10mh: If you could have a dinner party and invite five writers dead or alive who would they be and why?

I don’t do dinner parties, but a pint with Brendan Behan would be high on the list, then to be in attendance at a Malcolm X speech, maybe finish the night off with a performance from Nina Simone.

10mh: What are you currently working on?

The Liverpool Mystery Series will be four books in total, one published, three to come. The Prequel, the One Road short stories with characters and locations from the series is available from Amazon now.

Book 1 Under The Bridge is available now through good bookshops as they say [editor’s note: we recommend Liverpool’s News From Nowhere!] or direct from Northodox Press.

Coming Soon! is Book 2, The Morning After – An Inspector calls and a coming of age drama.
Book 3 will be Fire This Time – A death in police custody, Liverpool Football Club, and Global warming.
I am currently working on Book 4, The Wicklow Boys – Where history comes to life.

Jack Byrne and John Maguire will be in conversation on the subject of “Not ‘I am’ but ‘We are: Working-class identity in British-Irish fiction” as part of WoWFest21 on Tuesday 18 May at 6 pm.