We Fight Fascists review: Daniel Sonabend’s history of the 43 Group for Nonfiction November 2020

My first review for Nonfiction November 2020 is We Fight Fascists: The 43 Group and Their Forgotten Battle for Post-war Britain by Daniel Sonabend, published by Verso Books. Powerfully opening with Group member Morris Beckman ‘getting a kicking’ from a couple of fascists in a street brawl, before leaping over a wall and realising he’s out of the frying pan into the fire: surrounded by an even larger group of right-wingers, until pal Gerry Flamberg arrives to rescue him and they fight them off. Sonabend then details his path from knowing nothing about this post-war Jewish anti-fascist organisation to having it absorb him completely. A call from a friend who had been watching a documentary about 60s hairdressing sensation Vidal Sassoon and his involvement with the 43 Group sets the writer’s curiosity ablaze:

Jews fighting back and beating up fascists – these are some of our favourite stories, so why had the community forgotten?

That leads to a wonderful moment where he asks his grandfather, John, if he’d heard of the 43 Group, only to get the memorable response back,

‘Heard of it,’ he said with jocular indignation, ‘I was in it!’

The book is obviously a work of love and of gratitude, born from a wish to set the sparse record straight, bring the 43 Group to wider notice, correct some of the myths that have grown up around them, and put back into circulation the lessons that can be learnt from their grandparents’ generations’ experience as fascists march again in British cities. The Battle of Cable Street provoked in 1936 when the Leader of the British Union of Fascists, Oswald Mosley, tried to march through Jewish East London has achieved near-legend status on the left, but I imagine many would have thought that victory against Nazi Germany caused homegrown fascists to lay low in the post-war years. As Sonabend discovers, that wasn’t the case at all.

For Mosley and his followers, being in prison together during the Second World War heightened their commitment and given them a warped badge of honour. The post-war period saw a jockeying for position, with representatives of smaller fascist groups looking to catch the eye of ‘the Leader’ when he made what they assumed would be his imminent return to politics. Many of the Jewish youngsters who formed the 43 Group had begun by defending themselves at school against antisemitic bullying. Some returned home from other campaigns to discover the devastating news about the Holocaust, or saw the aftermath while serving in Europe. Some had lost relatives, but all were affected by it. When fascist street speakers, newspaper sellers and petitions against ‘alien’ refugees began appearing again, there was a feeling of ‘not on our watch.’

The government decided not to ban fascist activities, even though there was popular support for doing so, citing free speech. Mosley was perhaps seen as a joke who had had his day and the members of the smaller groups as ineffectual cranks. The Board of Deputies remained as conservative after the war as it had been in the 30s and its Jewish Defence Committee insisted on keeping everything law-abiding, preferring raising awareness to throwing fists, although it did keep fascist groups under surveillance and pass information to the authorities. But on the streets, fighting fascists was largely done by communists. The 43 Group was born out of hanging out together at Jewish youth organisations and sports clubs, and claimed not to follow any political doctrine other than anti-fascism.

Escalating tensions in Palestine and the lack of resolve from official channels led to the Group’s creation in the autumn of 1946, although there are different anecdotes for how it got its name! ‘Stealing pitches’ from the fascists was one tactic, leaving them to less favourable or less accessible locations, as was heckling meetings and street speakers, but knocking heads together and the targeting of fascist leaders during meetings and at home also occurred. Your appetite for a good pummelling may determine how much you enjoy this part of the story, but it is clear that the people on the end of it were nasty pieces of work who had no qualms about encouraging or committing violence against others. When the 43 Group went up against the fascists, the disruption caused some of them to suspend their operations.

Women joined the 43 Group as well and were keen to fight, normally seeking out fascist women at meetings. There were espionage missions and a Group newspaper, funding received from businessmen, a Central London headquarters and regional groups, with an admin staff. Daniel Sonabend’s research is comprehensive and the message from his heartfelt afterword is clear:

Fascism is a politics of violence. It rejects the norms of civilised democracy and wishes to return to a state of nature, where might is right. The 43 Group realised that to defeat the fascists you had to beat them at their own game and hit them twice as hard as they hit you, and doing so was a moral imperative… For anyone who baulks at the idea of turning to violence to preserve democracy, the 43 Group’s story is essential.

We Fight Fascists is definitely my favourite nonfiction read of 2020 and I recommend it without hesitation to anyone who loves what Sonabend calls the ‘things which give life its rich colour,’ which fascists seek to tear down. Fascism is ultimately always a destructive ideology, one that only wins by turning its opponents against each other. It bears repeating that Jews and the left can only win by fighting antisemitism and fascism together. That is the lesson of the 43 Group: some of them were relatively conservative, others were more left wing, still others were communists. Some brought brawn, others brains. The Group worked because it pulled together despite these differences, hence ‘We Fight Fascists.’ 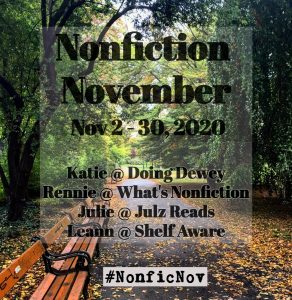 What are you planning on reading this November? Let me know in the comments below.

If you would like to buy a copy of We Fight Fascists – and support local bookshops  – please follow this link. We may receive an affiliate payment if you do.

I know that you have a far wider reading list than I do but can I suggest a book for you to review? May not need any more promoting ‘cos it’s been reviewed in the weekend papers here, but you know an independent voice doesn’t go amiss. It’s called ‘The Japanese’ ( so you can see why I read the review) and it’s described as A history in 20 lives. People that I had never heard of ranging from Murasaki Shikibu via Kyoto, Buddhist monks, samurai and shoguns to more or less the present. Can’t get more non-fiction than that

That does sound good – I hadn’t heard of it but will take a look. My ‘to read’ pile is out of control, as ever!