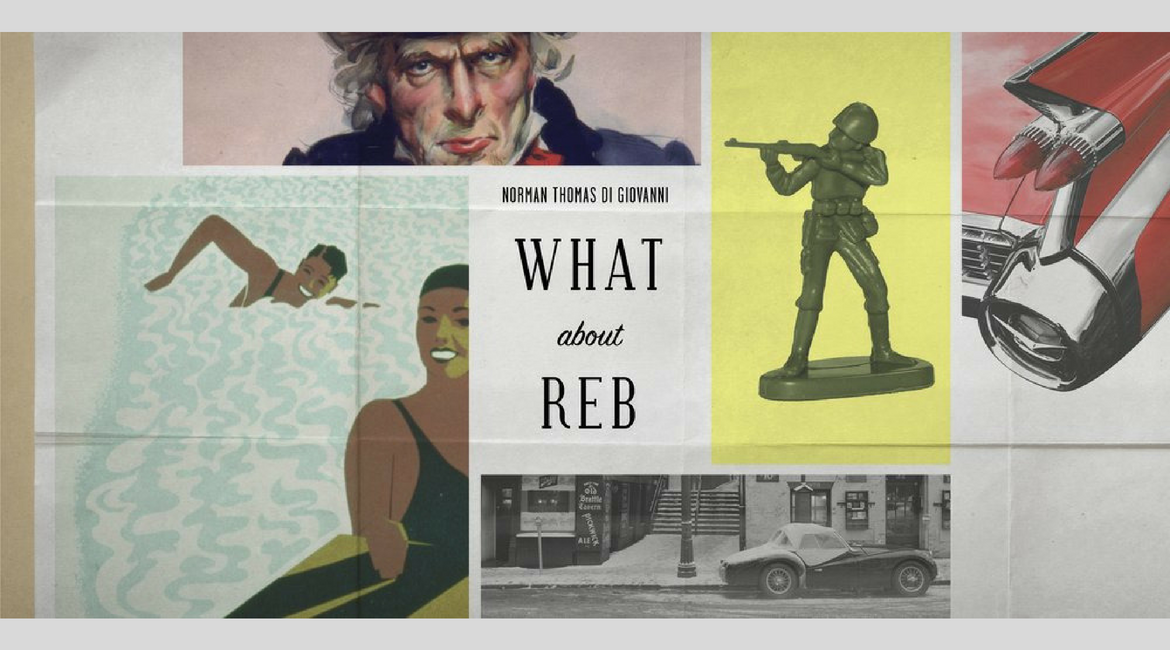 There aren’t enough books out there like What About Reb, so be warned that when you finish reading it, you are likely to want to flip right back to the start to enjoy more of the world of Italian-American Reb in 1950s North Boston.

Reb could be an early incarnation of Don Draper, with his fine suits, silk ties, Buick convertible, taste for champagne and eye for the ladies, but Reb’s full name is Rebelle – rebel – Soderini and and he is fully a part of his own loving extended family and the anarchist community around them. His father having partly retired from his construction business, Reb and his brother, Teo – short for Ateo, or atheist – are taking over and it is Reb who ensures they continue working to his father’s exacting standards. Reb has inherited his father’s talent for the work, while he has grown up with anarchism in his blood, his name and in the songs he sings, perhaps without fully understanding the implications of his father’s political choices, until a letter arrives with his call-up papers for Korea.

What has been abstract theory set out in textbooks becomes concrete as his father denounces militarism and encourages Reb to head to Sweden. Life is good though, with friends, work and a shared beach-house for summer weekends. What would it take to walk away from such a life forever? His mother Angelina watches and waits, as mothers of sons always do during wartime,

What was he doing to her. She was a machine for giving and he a machine for taking. This thought, his selfishness, confused and angered him. She was about to be ground down between him and his father. Reb’s mouth went dry.

In the course of a weekend away with the boys – his last one of freedom spent cooking steaks, drinking heroically and singing Bandiera Rossa – Reb meets Rosalind and pulls something of a Don Draper number on her. He tells his friend Alex that when it comes to women, ‘I never let them tell me no,’ but tells Rosalind that, ‘I never want anything the woman doesn’t want.’ After their one-night stand, he is concerned enough to worry about whether she came or not… out of concern that that might make it more likely that she gets pregnant.

He has zero affinity for the Army, but zero inclination to run either. He views his father’s creed as being somewhat old and unconnected to his own life, until conversations with his father’s best friend Patsy bring him to an understanding of what lies behind the slogans and what they have put on the line for their beliefs. He learns that they both fled Italy to escape the First World War, before having to run again to avoid American drafts. Reb comes to realise how Emilio and Patsy have lived as anarchists, that beyond espousing theories, they have made sacrifices and taken stands so that Reb’s generation could have an easier time of it.

Half these stories you hear about the old man you never know what he really done.’

‘Course. Counts more that the things get done, not who done them. That’s Emilio. That’s anarchist.’

The letter from the Army and his ultimate decision have the effect of taking Reb out of his father’s domain for a while – out of Boston, out of the North – giving him more chances to learn. He is constantly learning, taking tips on clothes from Alex, who works in a haberdashery, hearing the laments of those further down the path of marriage and kids than he is, talking to Rosalind to gain essential intelligence on how the other side sees the battle of the sexes. Ultimately, though, he learns that the world is closer to how his father and Patsy told him it was than he knew and that the life they built did not come easy, but created men capable of drastic action.

What About Reb is published by Abandoned Bookshop, dedicated to uncovering forgotten and out-of-print gems. Norman Thomas di Giovanni enjoyed a long career that included journalism, travel writing, essays, translations and collaborations with Jorge Luis Borges. The novels What About Reb, Tillie and the Tailor and A Painful Duty were written towards the end of his life, which makes me a little sad at the thought that there are not many more books of his to read – I would have loved a sequel showing how Reb’s family fared once the Red Scare began, or how he reacted to the Vietnam War draft and attempts to avoid it. Or even a prequel telling the story of the young anarchists Emilio and Patsy…

A reader can dream and be satisfied with regular rereads of this engrossing tale.

Norman was always very clear to me during the process of editing this book that WHAT ABOUT REB should not have a question mark at the end of it. He kept telling me he’d explain why at some point. In fact, his final ever email to me was:

I never did find out, but naturally we didn’t dare put a ? on it.