I am writing about James Bond in Moonraker and I can almost hear your groans from here. What is there that can possibly be left to be written about Britain’s favourite secret agent that hasn’t already been said a million times before, by feminists, by film reviewers, even by distinguished literary gents? I thought it had all been covered so completely that it could be taken as a given until, screening Goldfinger at Christmas with friends, someone confessed to only then understanding what the Austin Powers films were poking (ooh, baby!) fun at.

My suggestion of a Bond film after Christmas dinner was testament to how far I have travelled since my teenage days. Back then, the festive Bond would usually see me with head buried in a book, occasionally glancing up to sneer disdain at another cheesy line from Roger Moore as my family groaned and chuckled around me. I thought Bond was dreadful, so hackneyed in its clichés – the women only sassy up to a point to make the inevitable surrender greater sport for the hero, the gadgets, the comedy characters – that it was better off ignored. I thought I knew it backwards but didn’t enjoy the knowledge.

Until Casino Royale, that is.

The vow to never watch another Bond film was taken after witnessing the Brosnan incarnation waterskiing down the side of a glacier in Die Another Day. Despite the absence of anything with teeth in the scene, that was my ‘jumping the shark‘ moment. After all the incredulity I had thrilled over as a child – the human Jaws biting through a cable car’s wires, death wielded by bowler hat, spiked shoe or gold paint – I could bear no more.

But Casino Royale was intriguing. A good story well told, unlike some of the others, needing no gimmicks to distract attraction from plot holes you could drive an invisible car through. Daniel Craig’s Bond a vulnerable, often wrong, sometimes out-of-control human being rather than a wise-cracking caricature. Talk was of how this was as the author had intended, the producers returning to the source material having receiving a Jason Bourne-inspired scare. Post 9/11, it was felt, we needed more humility from our secret agents and the Broccoli family – always astute readers of an audience’s moods – delivered.

Softened up by that cinematic experience, it was perhaps inevitable that when a copy of the book came into my hands via a secondhand store in Tokyo, I would fall for Bond faster than a mini-skirted SMERSH agent sent to kill him. As ever, the rogue’s charms proved difficult to resist. So when I was offered a windfall in the shape of an almost complete set about to be thrown out, I grabbed at them. With that pleasing old book aroma and cover art calculated to have any teenage boy’s blood racing – girls! guns! rockets! – this was my chance to see if the rest of the series could live up to Casino Royale’s promise of a more appealing, albeit less charming, Bond. 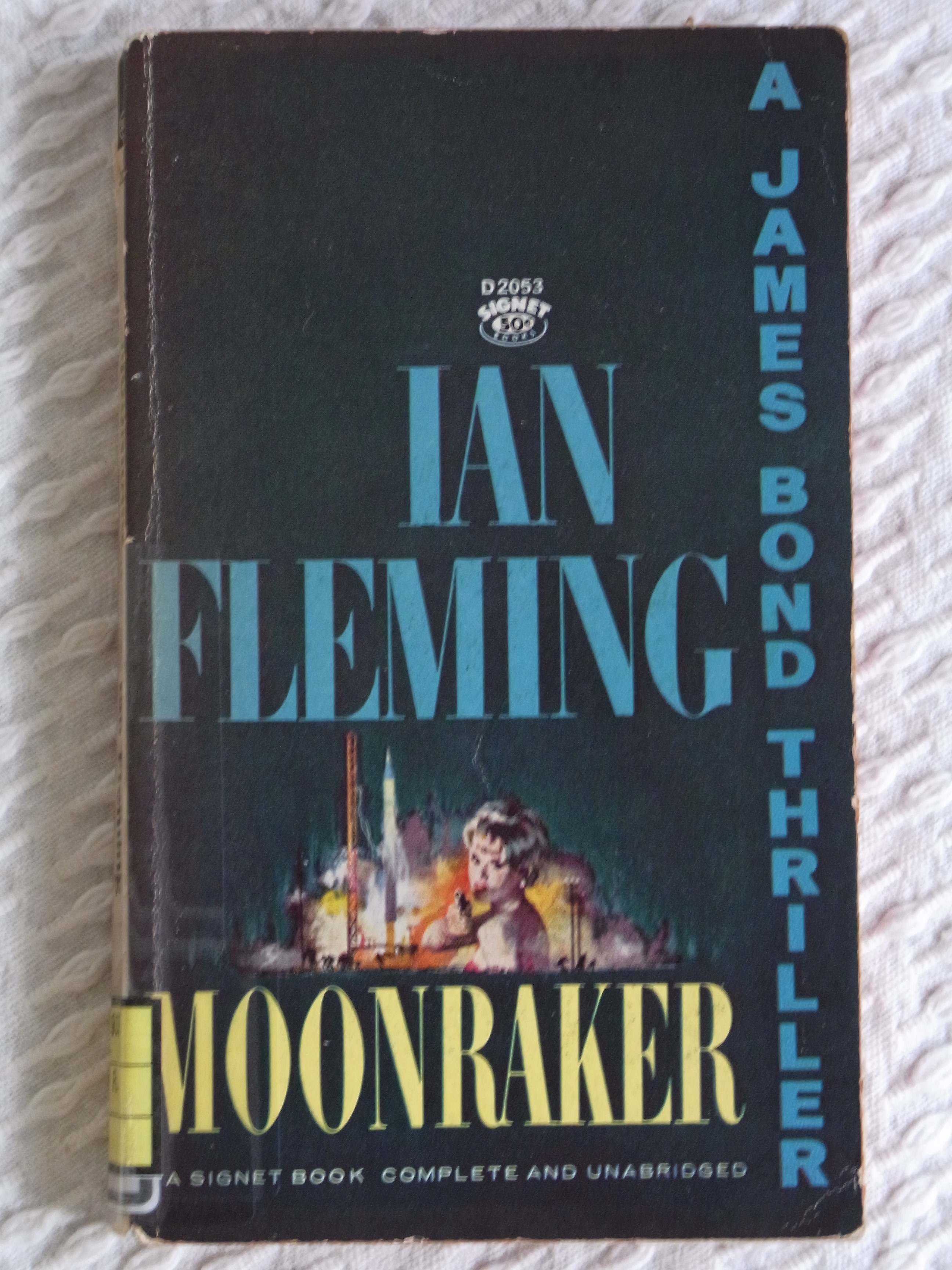 What you know are to become key elements of the films already exist in the book. Bond’s love of gadgetry and the high life are evident, whether that is fine tailoring, his Ronson lighter for use on his own blend of cigarettes, or the little flat off the King’s Road. He drives a Bentley, rather than an Aston Martin, an older, classic model he takes pride in racing against foreign engineering, at least until he totals it. 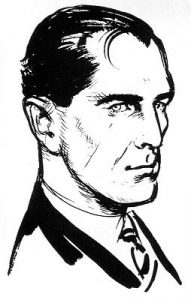 Ian Fleming’s sketch of how he imagined James Bond

Yet while aiming for effortlessness in all this acquisition, Bond is only one loss at cards away from ruin. We see him chafing at the daily routine and ploughing half-heartedly through the paperwork just like any other office worker, although in the privileged position afforded to a senior civil servant, he is no idle playboy. When away from London on operations, he has a Leica camera in one pocket and a Beretta in the other but perhaps more telling are the gadgets he lacks: having to drive to the next town to telephone allies in Scotland Yard or waiting for essential information to arrive by telegram.

Also lacking is any contact with anyone he isn’t working with or for. Perhaps this lack of companionship is compensated for by being surrounded by women, of course possessed of a beauty that mere mortals can only dream of. Whether it is the carefully selected waitresses of the gambling club M frequents, the steely Secret Service secretaries, or a ‘severely competent’ police woman, the lucky fellow rarely encounters a plain woman. Yet central female characters Gala Brand and Loelia Posonby – though crazily named – are also blessed with a quiet strength, essential to keeping the battered and broken Bond on his feet throughout the action.

Though Fleming laments that Posonby is approaching an age where:

Unless she married soon, Bond thought for the hundredth time, or had a lover, her cool air of authority might easily become spinsterish and she would join the army of women who had married a career.

Perhaps this is not the terrible fate he makes it out to be, and it is arguable if a quick tumble with 007 would be a better one, especially as he is facing a similar destiny. His own prospects for a long and happy retirement seem slim, after all. Although contemplating certain death with hopelessness after torture and near defeat, he never questions the rights and wrongs of the power the Service wields over his life. He is good at the essentials of his job, his boss is decent, that is enough. Bond is far more of a bastard than you remember, quite a lot rougher around the edges and unafraid to fight dirty if circumstances dictate. Able to pass with the Lord Basildons of this world, but not quite of them:

Bond knew that there was something alien and un-English about himself. He knew that he was a difficult man to cover up. Particularly in England.

Perhaps it is his misfortune that the exotic locations so fundamental to the films are passed over for this tale, which largely happens within sight of the White Cliffs of Dover in the usually sleepy South of England. Moonraker’s plot delivers such atomic age fears as a rogue scientists, cities laid waste by the most powerful rocket ever built and an unsettling yet impolitic mistrust of those who have gone from enemies to allies in the blink of an eye.

It is a cracking read, belting along at a great pace and lending a warmth and a human side to its characters that you would perhaps not believe existed if you had only watched the films. You may think you know all there is to know about James Bond, but you won’t until you experience him on the page.

ten minutes hate and the mortal bath are reviewing all of the James Bond novels, (sort of) in order. Track down the others here:

ten minutes hate is on holiday

A sensitive reading there, JCG. I look forward to your in-country interpretation of ‘You Only Live Twice’. Of course (adopts professorial tone), Bond is perhaps best appreciated if one does the books in order… the which is fine talk from someone who read the last one first, but I was very young, so cut me some slack (in light blue tropical worsted, please). Clothes, Ronsons, pigskin suitcases, the delectable “Lil” Ponsonby, 60 Balkan Sobranies with three gold bands… contrails from the BOAC age.
Perhaps this merits a Bath post!

I am reading them in order, of course. Well, in order of the ones I now own, so next up is From Russia With Love.

Why don’t we review the whole lot between us?

What a good idea – deal. Perhaps I shall begin with The Man with the Golden Gun, again, then! Which ones have you not got?

Difficult to know which ones I don’t have! I do however own From Russia With Love, Dr No, Goldfinger, The Spy Who Loved Me, The Man WIth the Golden Gun and Octopussy, as well as something called The Diamond Smugglers which is not Bond but looks of a similar ilk.

I always wanted to see a copy of The Diamond Smugglers… it’s non-fiction (inspiration/research for Diamonds are Forever, presumably). See image below for handy Bond paperback reference… very like that pic I took of my ‘reclaimed’ collection, in fact, only including Moonraker and TSWLM (bah!).

Fantastic. I really enjoyed reading your review. The literary 007 is, indeed, underated. I, too, fell for Bond at a very young age – my story can be found on my own blog here: https://thestevenaspinallarchive.com/2019/05/25/a-love-letter-to-james-bond/