If you were disturbed last night by a noise you couldn’t identify, it was probably the wailing and g

nashing of teeth of those who would consider themselves proper, serious journalists, having just watched the Ross Kemp documentary on Israel. The programme was screened over two weeks, with last week’s showing the situation in Gaza and last night’s that in Israel. Like those journalists, I confess, I was prepared to be cynical.

Within minutes of the start of the first programme, Kemp was having his bag searched by a member of Hamas at the border, before embarking on a trip to watch terrorists set roadside bombs, which the voiceover assured us were later removed without causing injury. So far, this ticked all the adrenaline-junkie boxes. However, his savoir-faire was further ruffled, and the journalistic corps given additional cause for heart failure, when he interviewed a young lawyer who had decided to become a suicide bomber. Complete with crudely-made face mask and explosive belt, he was a picture out of any bus traveller’s worst nightmare. Even the normally gung-ho Kemp looked stunned. Resolute of stare and sure of voice, the young man set out his reasons for choosing this terrible destiny.

This, for me, was where the documentary jumped light years ahead of Kemp’s usual bullets and glory soirees into dangerous territory.

the terrorist told him, taking Israel’s strikes on Gaza in early 2009 as his justification for action. This tied in with a comment from the UN Director of Operations for Gaza, who warned:

if you treat people as hostile, they will become hostile

I was once a 24-year-old lawyer and I knew plenty of others, from all faiths and classes. None, I am certain, had ever contemplated suicide attacks on civilians, unless perhaps on a specific group of recruitment specialists keeping us out of the Magic Circle firms and away from the six-figure salaries therein. When you are young and idealistic, the urge to be a lawyer usually stems from, according to my own unscientific straw-polling anyway, a desire to change a bad situation for the better, to seek to help your fellow humans order their affairs, as well as to bring resolution and be an arbitrator of disputes. The lust for money and terrible taste in ties comes later, while deciding to blow yourself and others up shouldn’t feature at all. If even the lawyers are now militants, we have a serious problem.

It seemed as if Kemp agreed. However, he didn’t go to Israel for the second part of the programme looking to tag them as the perpetrators. Instead, he spoke to people who had lost family at the hands of terrorists and also elicited opinion across a spectrum of Israelis, from those who want to ‘seize every hill’ to others who prefer hanging out in Tel Aviv and shopping. Kemp did an excellent job in resisting the temptation to glamorise or ignore the futility inherent in the conflict. As Palestinian teenagers rained down rocks on Israeli troops and they slung back tear gas, unfortunately our brave lad caught downwind of it, he turned to camera without any of the drama common to news stories on similar confrontations, to ask: ‘what’s the point?’ It was difficult to disagree with the man as his eyes streamed. It was also difficult to disagree with his conclusion to the programme, that:

However, it was near impossible to think other than well, nice one, but how does that get us anywhere? In Israel, as in many other conflicts, a refrain has been: it’s a minority causing the problems; ordinary people are the key to peace. How helpful is it? Viewers hoping for an easy checklist of actions to bring peace were surely disappointed. However, Northern Ireland offers one example of two opposing peoples facing down the crazies to bring peace, with a new shopping centre and ‘Titanic Quarter’ where once was bombs and savagery. The inhabitants of Tel Aviv would no doubt approve. So it appears that in Israel, as in Northern Ireland, all that Western governments can do is get out of the way and not do anything to make peace less inevitable. Atrocities must be condemned evenly. Projects like these supported. Hopefully one day Ross Kemp will have to seek out alternative locations in which to get an eye and lungful of tear gas. 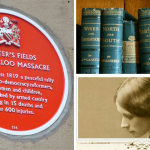 Lark Pies to Cranchesterford: The real Lark Rise and Cranford

If ye break faith with us

ten minutes hate is on holiday

A dolly for Christmas

Roll up, roll up…

When I wake up

Clear away the rust

Thanks, pal. Any chance of you updating your own fine blog this decade?

Mebbe… I’ll think of something.

They got there before you… again!