We are the Robots: Kraftwerk at Manchester International Festival

To Manchester! The city sweltered in the unaccustomed sunshine, as I journeyed up from London for Kraftwerk at Manchester International Festival, which opened in style with this one-off performance at the Velodrome. The band,

(as noted in the programme) are also cyclist enthusiasts, so when we arrived to find the stage and standing section in the centre of the track, speculation mounted as to how they might use this unique space to full effect. Sadly, they didn’t arrive at the venue on bikes as they have done in the past, but announced their arrival on stage with a boom from the speakers and a back-lit projection of the familiar four figures onto the curtains drawn around it. These then swept back as they launched into ‘Man Machine’. The crowd, as you might expect, went wild. 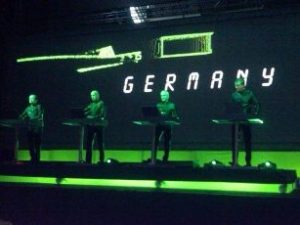 As Tour de France began, all eyes began scanning the track, excited shouts going up at the arrival of four cyclists. Ralf Hutter announced Team GB, with a wry aside to point out that their trainer is German. The music was perfectly accompanied by black and white film of Tour cyclists toiling towards the crest of a lofty Alp and the gold-medal winners hurtling around the track. The song ended to a wistful promise:

Next time we will bring our bikes.

The rest of the set list took in Trans-Europe Express, Model and Autobahn, sounding at the same time retro and yet still fresh.  Then the curtains closed again before reopening for this: 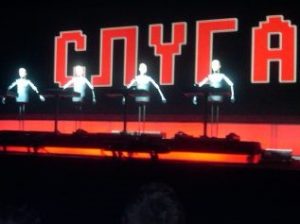 Newer songs Radio Activity and Vitamin heralded the return of the human variants and a 3D extravaganza, all of us sporting the glasses like a 1950s B-movie audience.

As promised, it was a two-hour set, almost to the second but displaying a human and playful side to the men, alongside the ruthless efficiency of the machines. Kraftwerk have influenced so many acts across all genres that seeing them live gives you the chance to hear the source material of all the music you have ever loved.

And you get to hear it played bloody loud on a great sound system while you dance like a madman. Kraftwerk at Manchester International Festival provided the best kind of history lesson there is, I’d say.

To declare an interest, as I drank a fair bit of their champagne last night, I feel duty bound to mention the utter aceness of the Manchester International Festival programme, which you can find here. If I had a season ticket on Virgin Trains, I’d be back for the Durruti Column’s Paean to Wilson, Elbow and the Halle, Laurie Anderson and Lou Reed, perhaps also taking in Rufus Wainwright’s Prima Donna. The weather has returned to predictable Mancunian inclemency today, but I’m sure that won’t spoil the party!

Terrible ones by me, do forgive – they were taken on a very old phone!

Everybody’s looking for something